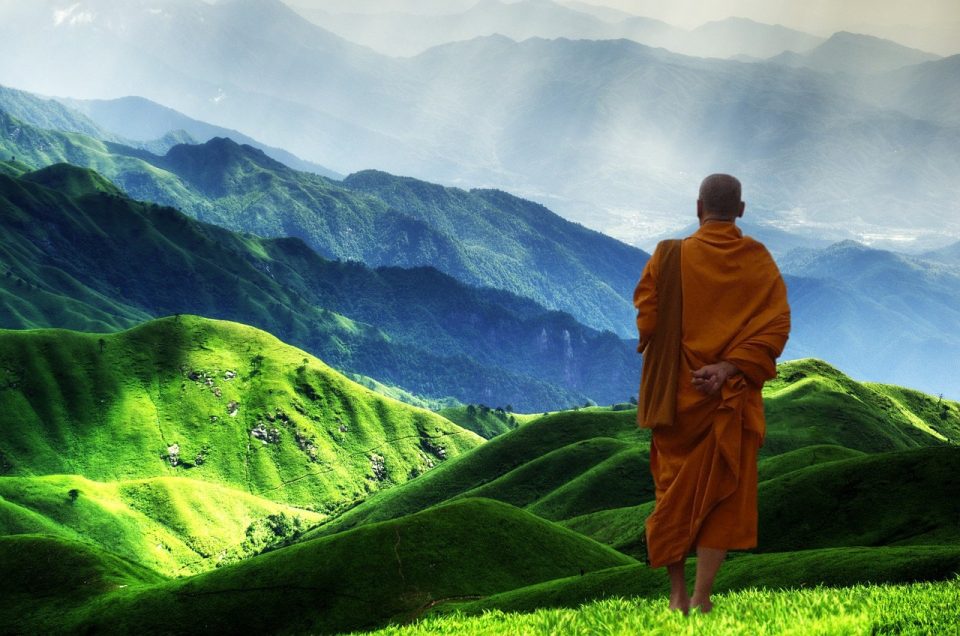 Tibet is the realm of mystery, spiritual mysticism, alluring mountains, glaciers and has a huge volume of ice. Often referred to as “the roof of the world”, “the land of snows” or “the third pole”, the Tibetan Plateau covers a surface that’s four times larger than the one of France, an elevation of 4000m-5,000 m above sea level and is squeezed among the tallest peaks on earth. Thus, Tibet shelters some of the top trekking routes across the globe and Tibet trekking ranks high on the list of trekkers travel destinations.

Tibet trekking has some particularities that attract like a magnet, hikers from all over the world:

Tibet is a trekking paradise that reveals the northern face of the Himalayas, under a different angle than the treks of India and Nepal, which reveal southern perspectives. Tibet weather conditions are colder and drier than those of its fellows Nepal and India, firstly because of its altitude and secondly because Himalayas block the humidity of the tropical monsoon to arrive in the northern part.

Foreigners have the possibility to travel inside Tibet only via travel companies that are responsible with organizing their trip. Independent travelling, trekking or hiking is not permitted. Foreign tourists are required to have travel permits, a guide, a driver, a private vehicle and an official itinerary.

It is recommended that you contact the travel company for Tibet a couple of months before you plan to go to Tibet.

Tibet trekking season is shorter than in Nepal, India or Bhutan, from second part of April till late October. This is due to elevations surpassing 5,000 m altitude, long winters, low temperatures and heavy snows that block the trails.

There are many options in terms of trekking routes in Tibet, but some of the most interesting are: 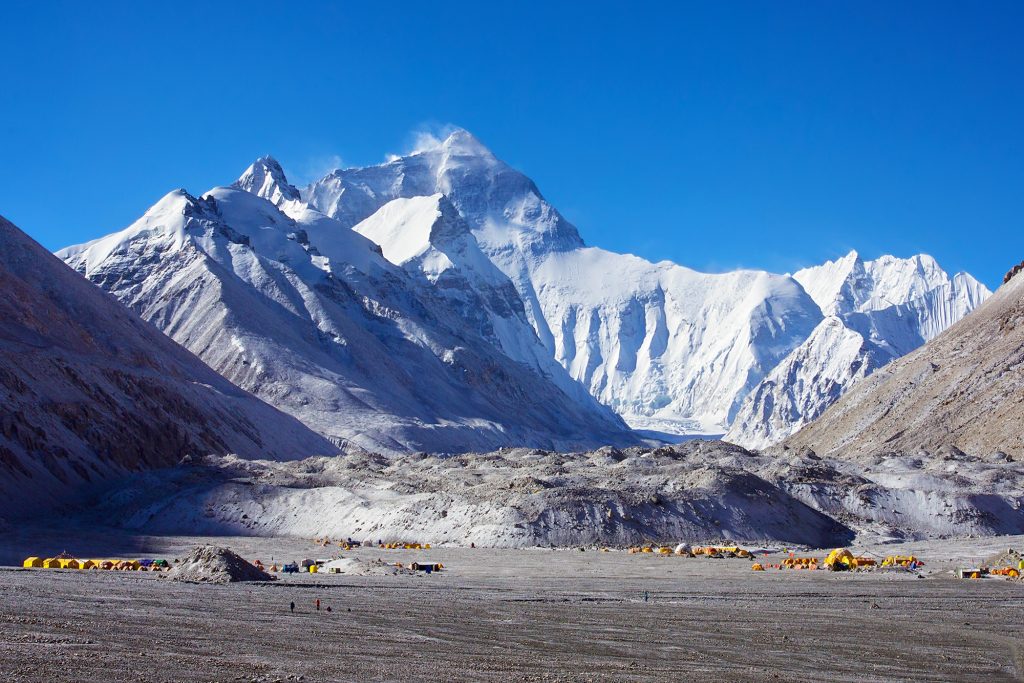 This classifies as the trekking route reaching the highest elevation – it reaches 6,340 metres in altitude and it is also considered among the most scenic in Tibet. The Advanced Everest Base Camp Trek starts from the monastery of Rongbuk, and via the Valley of Rongbuk the trail leads directly to Mount Everest. The distance to the Advanced Base Camp is rather small, about 22 km, but the difference in altitude is about 1,310 m, which is too much taking into consideration that the start is already positioned at high altitude.

In order to acclimatize the trek is split in several days, with an intermediary base camp, while you trek up and down the mountain.

The Tibet trekking route towards the Advanced Base Camp is less famous than its peers of Nepal but compensates with more spectacular panoramas of the northern face of Everest. The views here are by far superior to those you can enjoy in Nepal.

This route is usually used by climbers who tempt to summit the Everest via North Col. 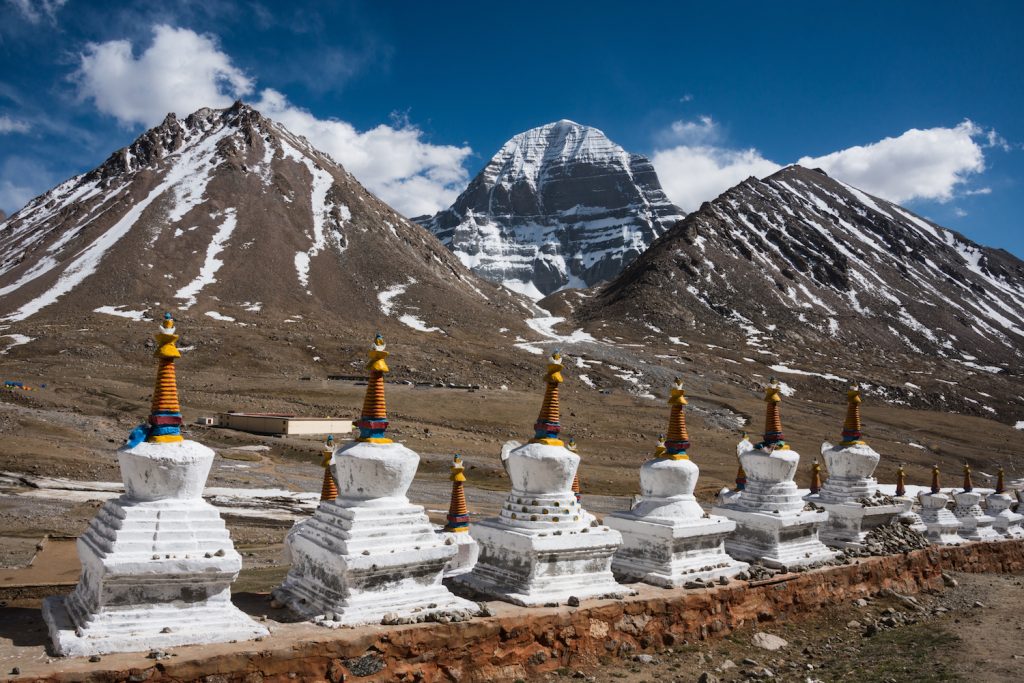 Towering above the surrounding region, Mount Kailash skyrocketing at 6,714 m is considered the most sacred place inside the Tibetan Himalayas.  It was regarded as the center of the world by locals’ ancestors and is a holy mountain for Buddhists and Hindu devout alike. Hindus see Mount Kailash as the sacred Lord Shiva’s abode. Here you will encounter many pilgrims making the journey around the mountain in the hope of being released from the birth-dead cycle. The circuit length, the “kora” that circles the peak is about 52 km and is more than spectacular.

This trail has its fair share of challenge as you trek at over 5,600 m altitude, through rugged landscape and snow-covered rocky cliffs.

One of the best trekking routes in Tibet, that connects two sacred monasteries, offers a glimpse of life of these mountain people, immerses you into the Tibetan religion and local culture and drives your steps through the sturdy Tibetan scenery. All these make of Ganden to Samye Trek a pinnacle of any travel itinerary through Himalaya.

Even if it might seem easy this trail crosses two passes at over 5,000 m altitude, Shug La and Chitu La and has a length of about 80 km through the wilderness of the Tibetan Plateau. In summer you may have the chance to encounter in your way nomad encampments and experience the ancestral Tibetan culture.

Samye Monastery is known as the first Buddhist monastery ever build on Tibetan territory and is a place of pilgrimage for Buddhists.

This is known as a more manageable trail in the Tibet trekking sphere. Here you will be welcomed by the moon like Tibetan Plateau landscape and meet the Drokpa culture based on semi-nomadic lifestyle – a way of life about to disappear.

Tsurphu to Yangpachen Trek is about 45 km long and starts at Tsurphu Monastery (the leading monastery of the Karma Kagyu Sect belonging to the Tibetan Buddhism religion), continues along the river Tsurphu, through large plains, alpine tundra and altitude valleys, before arriving in the Yangpachen valley. This trek will not drive you inside the Himalayas, but you will have distant views of these majestic mountains.

The trek also needs acclimatization as it reaches 5,400 m altitude at Lasar La Pass. If you get the chance to be here in May you can participate to the traditional Tibetan Saga Dawa festival that celebrates Buddha – his birth, enlightenment and death.

Considered by many among the most charming valleys across the globe, this trail leads your steps till the base of Everest and Makalu on the eastern side. This is a more secluded region that few travelers consider visit. Gama trek looks very similar to being transported back in ancient times, as you will meet several cultures like Lhoba, Monpa or Sherpa that strive to maintain their traditional way of life.

The area is quite famous for its rich flora, orchids, azaleas, wildflowers and verdant forests. Its maximum elevation is Shauwula Pass positioned at 4,900 m altitude.

These are just a few of the most interesting Tibet trekking adventures. Of course, this is a matter of taste and preference, so hopefully now you can make your decision.